With octopus… white wine from Greece, and French rosé and vice versa! 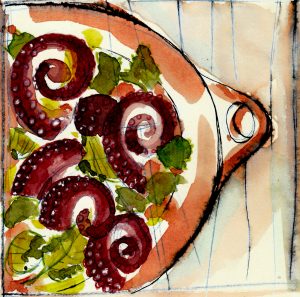 Octopus is one of the traditional stars of Mediterranean cuisine. Known in French as poulpe, the name comes from the Greek, polypouss, which means several legs. The eight-legged octopus can be prepared in many different ways and served warm or chilled. In France, octopus à la Provençale is a great classic. In Corsica, polpu is served chilled, in a salad with garlic, parsley, lemon, pepper and olive oil.

Greek chef Andreas Mavrommatis, who works in Paris and recently won a star in the Michelin guide, proposes two traditional recipes with a similar base of octopus cooked in a fragrant bouillon.

The first recipe, octopus salad, is served with celery which lends its notes of anis. The dressing uses olive oil with great bitters and piquant, Sherry vinegar and oregano which each contribute their flavours. With this recipe, I recommend a wine from the Ionian islands, specifically from the Isle of Cephalonia. At the Gentilini estate, the vines are pruned in the gobelet fashion and grow in stony, chalky soil at over 600 meters altitude. The estate produces a 2017 white wine by the name of Wild Paths made with the Robola grape. It is elegantly lemony and finely chiselled, with just the right depth and great tenseness that stands up well to the assertive seasoning on this dish.

A good French alternative takes us to the Terrasses du Larzac appellation and its terroir of ruffes (red soil from the Paleozoic era). In the heart of the appellation lies the village of Saint-Jean-de-la-Blaquière, home to the estate the Clos du Serres which produces the Saut du Poisson, a 2016 Languedoc white with great freshness and very pure mouthfeel. The Grenache blanc, which dominates the blend, is expertly managed and gives no excess richness. Equal proportions of Carignan and Vermentino then do their share.

With octopus seared on a scorching hot plancha

For the second recipe from chef Mavrommatis, the octopus is seared on a scorching hot plancha. This searing truly exalts the flavour of the octopus. Artichokes, sundried tomatoes, parsley, onions and a few just-sliced cherry tomatoes are then added. All these ingredients are combined with flavourful olive oil.

This powerful recipe calls for an expression of rosé wine where technicity is left behind. Here I am referring to the great 2016 Prestige Caroline from Clos Cibonne. This cuvée is made from old parcels of the Tibouren grape with the addition of 10% Grenache. This Côtes de Provence gives up amazing aromatics of red pit fruit, quinquina, spices and precious wood. The palate is ample and winy and highly cohesive.

The right rosé wine from Greece takes us to the Nemea area, for a rosé wine made with Agiorgitiko grapes that undergo 14 to 18 hours of maceration. This wine is made by the Gaia Wines estate which has vines planted at 550 meters altitude in Koutsi. This rosé, with its range of red fruit and spices, is beautifully winy and goes perfectly with the seared octopus. Enjoy the summer!